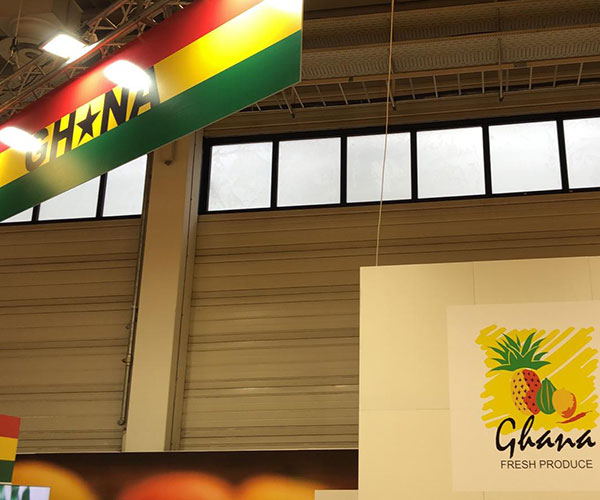 Albe Farms, located in the Akuapem South district of the Eastern Region has through exploration of product development and application managed to become a commercial farm. Ama Amankwah Baafi visited the farms and reports
Albe Farms began poultry production in 1995and was doing well until the outbreak of bird flu disease which hit badly the poultry sector. Yet, through determination and hard work, owner of the farm Albert Amponsah Atuah diverted to vegetable and fruit farming after thorough research.

From 2002, it has been producing local fruits and vegetables namely mango, pineapple, pepper and garden eggs, as well as Asian vegetables such as, tinder and ravaya (aubergine). It started exporting in 2006.
Specifically, Albe Farms cultivate in Amanfrom and Oboadaka in Akuapem South and Samsam in the Ga West Municipality of the Greater Accra region, while it has out growers for mango production in Obom, Ada, Kpando, Hohoe and Dodowa.
With its current production capacity, it produces about 1000 metric tonnes of pineapple, 4000 metric tons of mangoes and 1000 metric tons of chili pepper per annum respectively.

Albert told GRAPHIC BUSINESS that the chilli pepper is harvested in its green state as the market demands. “We don’t wait for them to get ripe and when we harvest in that state we get high yields. We are looking at about 5000 with the Asian vegetables,” he said.
Albe Farms has a turnover of about GHS350, 000, employs five administrative staff and over 100 farm hands, with majority being out growers.

“Our export market distribution channels are for importers and private agencies, am now working to distribute through the large retailers which are most of the supermarkets in the European market”, he stated.
Albe farms exports to Europe (Netherlands and Spain) and has a capital base of US$100, 00.
One needs to get GLOBALGAP certification to get to the market and a contractual agreement. The certification entails good agricultural practices on the farm so that produce will be fit for consumption.
Albert explained GLOBALGAP goes to the extent of knowing the type of chemicals a farmer uses, the active ingredients and then handling of produce among others.

He mentioned the lack of consistent supply of the fruits and vegetables as an obstacle. “Quality is also an issue. It is difficult sometimes to get the volume that you need due to lack of awareness of the demand of fruits and vegetables on the international market. I think it is the responsibility of the Ministry of Food and Agriculture and people like me to educate farmers on the opportunity,” he said.
He is also not happy that there is available funding but it is inaccessible and often times delay. When a farmer applies for a facility, the money becomes available during off season and so there is a delay in supplying for customers. “So by the time you receive the money it does not impact on your activity since orders may have been cancelled,” he stated.

Also, he said the cost of credit is high, there is high shipping cost and experience exchange rate loss, when during negotiation with a buyer one is asked to pay for freight here in Ghana. Transportation to port is also a challenge.
“We need to deepen public private partnership. Now the private sector and government seem to be working separately so at the end of the day the benefit is not realised. There should be consistent visitation to this area. Extension services limited to technical expertise but then when it comes to other services like the Ghana Export Promotion Authority visiting us to know exactly our problems it does not happen. They only try to put up public fora but which is even once a year,” he said.

Also, he said the value chain system in the sector; the partnership particularly within the private sector needs to be developed. “As a commercial and exporting farmer sometimes I suffer breach in the system. Sometimes I have a contract with small holder producers asking them to give me some kind of fruits and volumes but after signing agreement sometimes the fruits would be ready but they end up selling to other buyers” he explained.

He said there is also a challenge at the port because as a country we do not have vessels but depend on foreign ones that come to transport our perishable produce and so we do not have a control over the perishable items.
Labour has also become very difficult to get because the youth have all migrated to the cities and left the villages for the older generation to farm. Due to the aging workforce, productivity is low even though resources are available for production.
He recommended that through local government much emphasis should be laid on rural urban drift. Projects must be developed to keep the youth there and if farming is taken seriously we will get the youth back.

Albert said he is looking forward to expand Albe farms but is constrained by the issue of labour saying that there is need to develop the skills of the youth.
He is mostly self-taught and researches extensively to get buyers. To him, it is expensive to be attending fairs always and that there should be specific fairs for each exporter. “Now that I have the market am concerned about how to increase production and improve quality. The demand for pepper and pineapple is now on the increase therefore if Ghana should have about 10 percent of the market share it would benefit immensely”.

Albert has a BSc in agribusiness but read business at the advance level. “I have entrepreneurial spirit in me so I did self studies on these areas because I realised it has a long value chain”.
He hails from Akropong-Akuapem. He advised the youth to seek careers in agriculture saying, “It is lucrative if one invest his time and resources he will have a good pay back. The basic thing is to be well informed”.

Major finance relating to agriculture in Ghana is mostly short term and this Albert said does not boost agricultural production. “We normally have problems with our financiers and this should be addressed. If we could have a medium to long term finance we could have leverage. The Export Development and Agricultural Investment Fund can do more by including transportation, growing, marketing and all others”.
As a way of giving back to his community, Albert has been facilitating and collaborating with non-government organisations like Essoko to build the capacity of farmers in the area to be able to reach more buyers.

Albert added that food security offers a great business opportunity for Africa as the whole world now looks up to Africa for food. Albe Farms has received US$9,400 grant from SNV Netherlands development organisation to improve production to be able to reach overseas markets and also help connect them to new local markets including pineapple juice producers.
SNV has been working with pineapple growers in Ghana since 2006, and is active in five regions. SNV’s work in the pineapple sector currently reaches over 5,500 individual farmers, through 184 cooperatives around Ghana.